St. Thérèse of Lisieux lived in late 19th century France. She is also called “The Little Flower of Jesus”. Her mother died when Thérèse was only 4 years old. A few years later, her older sister, who had been like a second mother to her, entered a cloistered Carmelite monastery. This was a great loss to Thérèse, but she later followed in her sister’s footsteps and became a Carmelite nun at the age of 15. She was sickly throughout her life and died of tuberculosis in 1897 at age 24.

St. Thérèse of Lisieux is known for her simple holiness. She saw the things she suffered as redemptive suffering, from her poor health to the hardness of cloistered life to dryness in prayer. For her, the path to holiness was “doing of the least actions for love”.

Much of what we know about St. Thérèse of Lisieux is from her memoir Story of a Soul. She thought of herself as the “little flower of Jesus” in God’s garden of many flowers.

The splendor of the rose and the whiteness of the lily do not rob the little violet of it’s scent nor the daisy of its simple charm. If every tiny flower wanted to be a rose, spring would lose its loveliness.

St. Thérèse of Lisieux is the patron saint of tuberculosis and HIV/AIDS sufferers, florists, gardeners, and loss of parents.

Daily Mass Readings for the Memorial of St. Thérèse of the Child Jesus, Virgin and Doctor of the Church

In addition to the suggested readings below, the readings may also be taken from the weekday readings, the Common of Holy Men and Women, or the Common of Virgins. 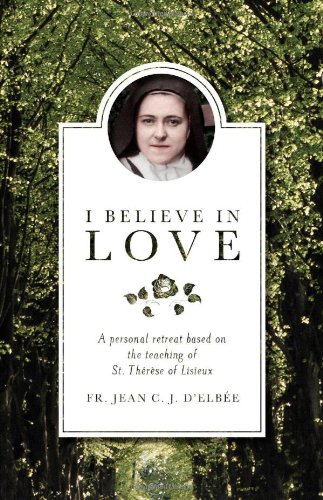 Take a retreat based on St. Thérèse of Lisieux's Way of Love

If you are willing to bear serenely the trial of being displeasing to yourself, you will be for Jesus a pleasant place of shelter.

We must first be able to accept the darkness and shadows in our lives. Jesus accepts us as we are. Once we understand that, then we can welcome Jesus into our hearts.

The world’s thy ship and not thy home.

Don’t be too attached to the things of this world. This is not our final destination.

You cannot be half a saint; you must be a whole saint or no saint at all .

Saint Therese of the Child Jesus is one of the saints who speaks to us the most about God’s grace and how God takes care of us, takes us by the hand and lets us easily climb the mountain of life – if only we abandon ourselves completely to Him.