St. Justin was a 2nd century apologist. He defended Christianity to the Roman emperor. His description of the Eucharistic celebration is cited in the Catechism of the Catholic Church, Section 1345:

On the day we call the day of the sun, all who dwell in the city or country gather in the same place. The memoirs of the apostles and the writings of the prophets are read, as much as time permits.
When the reader has finished, he who presides over those gathered admonishes and challenges them to imitate these beautiful things.
Then we all rise together and offer prayers for ourselves . . .and for all others, wherever they may be, so that we may be found righteous by our life and actions, and faithful to the commandments, so as to obtain eternal salvation.
When the prayers are concluded we exchange the kiss.
Then someone brings bread and a cup of water and wine mixed together to him who presides over the brethren.
He takes them and offers praise and glory to the Father of the universe, through the name of the Son and of the Holy Spirit and for a considerable time he gives thanks (in Greek: eucharistian) that we have been judged worthy of these gifts.
When he has concluded the prayers and thanksgivings, all present give voice to an acclamation by saying: ‘Amen.’ 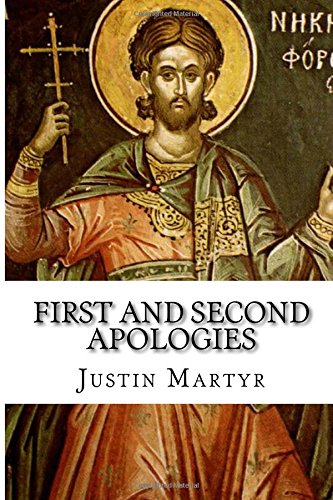 St. Justin Martyr is the patron saint of philosophers. His feast day is June 1.

In this video we see the words of St. Justin wrote to the Roman emperor in 155 AD to defend Christianity. He describes a Mass which would be familiar to us today – the reading from scripture, the homily, the…

We used to hate and destroy one another and refused, to associate with people of another race or country. Now, because of Christ, we live together with such people and pray for our enemies