St. Katharine was from Philadelphia. She inherited over several million dollars. And she gave it all away! She was especially shocked by the treatment of Native Americans and was appalled by what she read in A Century of Dishonor, a book by Helen Hunt Jackson. She decided to use her money to finance missions for Native American communities.

Katharine went to Rome in 1887 and met with Pope Leo XIII, asking for missionaries to staff the missions. Pope Leo said she should be a missionary! She heard the call of the Holy Spirit and decided to dedicate herself to a life of service to those in need. She founded the Sisters of the Blessed Sacrament on February 12, 1891 to minister to the needs of African American children and Native American children, especially those living in poverty.

She had a heart attack at age 77 and could no longer actively participate in her ministry. But that didn’t end her life of service. She spent the next 20 years in quiet prayer. She died at the age of 96 in

St. Katharine Drexel is the patron saint of racial justice.

The readings for the optional memorial of St. Katharine Drexel may be taken from the Common of Virgins or the Common of Holy Men and Women. 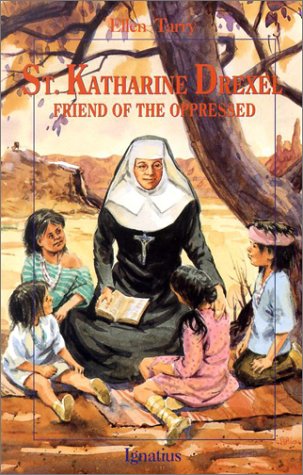 The American Saints Activity series helps families learn more about American saints in hopes that they will look to them as role models. One of the offerings in the series is based on the life of St. Katharine Drexel.

To earn the patch, youth and adults must learn about the life of St. Katharine. Then they participate in their choice of activities based on what they have learned. For St. Katharine, the activities include discussing what we admire about St. Katharine Drexel, drawing a picture, and organizing a food drive, fund raising event for a charity, or a service project.

More information about the program and the complete requirements for the patch can be found at Katharine Drexel Activity for Families.

This series is promoted by the National Catholic Committee on Scouting, but all youth and adults can do the activities and receive the patches, whether in Scouting or not, or Catholic or not.