St. John Neumann was born in Eastern Europe in 1811. He traveled to the United Stated in his mid-20s in order to do missionary work. At age 29 he joined the Redemptorist order. He continued to serve those in his community, especially the immigrants.

Eventually he became the bishop of Philadelphia. There he organized the first diocesan school system in the United States. In addition to his contributions to establishing Catholic education, he was also known for his holiness and his spiritual writings.

He died on January 5, 1860. He was the first American bishop to be beatified.

He is the patron saint of Catholic education.

Everyone who breathes, high and low, educated and ignorant, young and old, man and woman, has a mission, has a work. We are not sent into this world for nothing; we are not born at random; we are not here, that we may go to bed at night, and get up in the morning, toil for our bread, eat and drink, laugh and joke, sin when we have a mind, and reform when we are tired of sinning, rear a family and die. God sees every one of us; He creates every soul, . . . for a purpose. He needs, He deigns to need, every one of us. He has an end for each of us; we are all equal in His sight, and we are placed in our different ranks and stations, not to get what we can out of them for ourselves, but to labor in them for Him. As Christ has His work, we too have ours; as He rejoiced to do His work, we must rejoice in ours also. 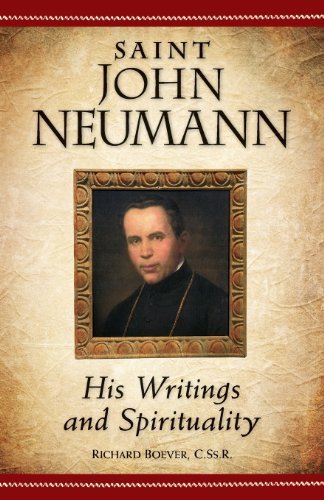 Read more about this saint

Prayer in Times of Discouragement

St. John Neumann knew discouragement in his life. He found himself very much on his own in the seminary. In his despair, he turned to our Lord for aid, didn’t give up, and wrote this prayer.

Watch a Video About Him