St. Juan Diego was a native American peasant who is known for telling the world about Our Lady of Guadalupe. He was born in 1474 and lived in Cuautitlán, which is near Mexico City.

Every day he would walk to Mass some distance away. One of these days, he was going to church and came to a hill called Tepeyac. A beautiful woman appeared to him and identified herself as the Virgin Mary. She told Juan to go to the bishop and have him build a shrine to her.

For more information about the significance of various parts of the image, see the article on Our Lady of Guadalupe.

He died in 1548. He was canonized in 2000 by Pope St. John Paul II. He was the first saint who was indigenous to the Americas.

He is the patron saint of the indigenous people of the Americas. 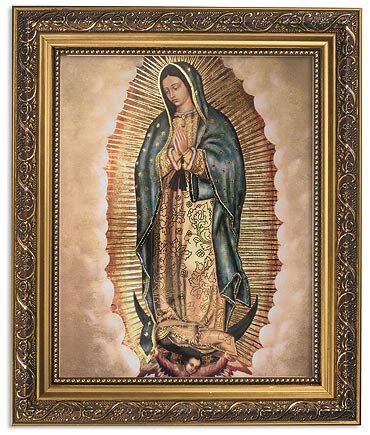 Get a print of the Our Lady of Guadalupe image

This patch encourages youth to learn about St. Juan Diego and to do activities related to him. Activities include making Castilian roses, drawing a picture, praying the rosary, and telling someone about Our Lady of Guadalupe. The patch is sponsored by the National Catholic Committee on Scouting, but can be earned by any youth, whether in Scouts or not.

This patch is sponsored by the National Catholic Committee for Girl Scouts and Camp Fire, but can also be earned by any youth. To earn the patch, youth walk to a weekday Mass and attend Mass in a different language than their own. They also learn about evangelization and about multicultural ministries.