You might know that Pope Francis has promoted devotion to Mary “Our Lady Untier of Knots”. The Human Knot game is a fun activity to add into a teaching about this devotion.

If you are not familiar with the devotion to Our Lady Untier of Knots or Our Lady Undoer of Knots, it relates back to what Saint Irenaeus said in the second century. “The knot of Eve’s disobedience was loosed by the obedience of Mary. For what the virgin Eve had bound fast through unbelief, this did the virgin Mary set free through faith.”. A painting by Johann Georg Melchior Schmidtner which depicts Mary untying a knot is also often associated with the devotion. The devotion often has special significance to those who are struggling with problems which don’t seem to have a solution. 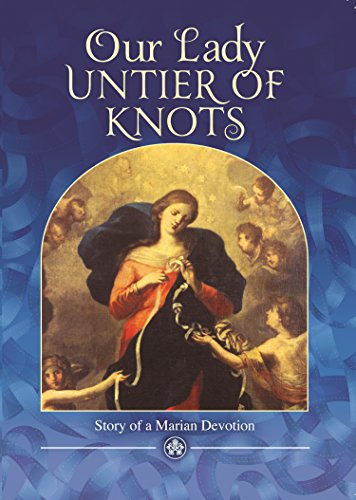 Learn more about Our Lady Undoer of Knots

So if you are introducing this devotion to your youth and want to add a game in which is loosely related, try this Human Knot game. Since it is a cooperative game also makes a fun team building activity.

Sometimes you will end up with two separate circles. This is OK. It just depends how the people grab each other’s hands at the beginning.They should try not to grab the hand of the person right next to them. The idea is to start with a knot.

For additional challenge, instruct some members that they cannot talk or blindfold some members. This works well if you have a few members who seem to always take charge and you want to encourage others to step into a leadership role.

For older groups, try adding some debrief questions at the end. What worked and what didn’t work? How did communication play a role in this activity? What leadership skills did they need to use? Did they ever feel like they wouldn’t be able to accomplish the goal?