October 15 is the feast day of St. Teresa of Avila , a Carmelite mystic, and doctor of the Church. Along with St. John of the Cross she worked to reform the Carmelite order which she felt was too lax. Eventually her work led to the formation of the Discalced Carmelites.

Teresa had powerful mystical visions which drew her into union with God, including one where an angel pierced her with a flaming spear of God’s love. This is called the “transverberation” of her heart. When her body was exhumed in 1582, it was incorrupt and found to have a wound from a spear.

St. Teresa of Avila is the patron saint of chess players, lace makers, loss of parents, people in need of grace, people in religious orders, people ridiculed for their piety, and those who are sick.

St. Teresa of Jesus teaches us that prayer is not to experience extraordinary things, but to unite ourselves to Christ. And the works of charity are the sign that this union is real. 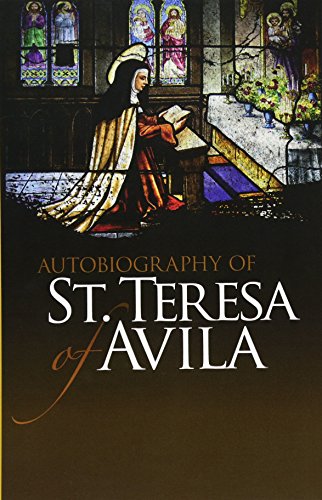 Read the Autobiography of St. Teresa of Avila

Christ Has No Body

This beautiful prayer reminds us that we must continue to do the work of God here on earth. A social media graphic and a printable copy are available.

Get this quote on a note card

Transverberation of the Heart of St. Teresa of Avila

Our Lord was pleased that I should have at times a vision of this kind: I saw an angel close by me, on my left side, in bodily form. This I am not accustomed to see, unless very rarely. Though I have visions of angels frequently, yet I see them only by an intellectual vision, such as I have spoken of before. It was our Lord’s will that in this vision I should see the angel in this wise. He was not large, but small of stature, and most beautiful—his face burning, as if he were one of the highest angels, who seem to be all of fire: they must be those whom we call cherubim. Their names they never tell me; but I see very well that there is in heaven so great a difference between one angel and another, and between these and the others, that I cannot explain it.I saw in his hand a long spear of gold, and at the iron’s point there seemed to be a little fire. He appeared to me to be thrusting it at times into my heart and to pierce my very entrails; when he drew it out, he seemed to draw them out also, and to leave me all on fire with a great love of God. The pain was so great, that it made me moan; and yet so surpassing was the sweetness of this excessive pain, that I could not wish to be rid of it. The soul is satisfied now with nothing less than God. The pain is not bodily, but spiritual; though the body has its share in it, even a large one. It is a caressing of love so sweet which now takes place between the soul and God, that I pray God of His goodness to make him experience it who may think that I am lying. During the days that this lasted, I went about as if beside myself. I wished to see, or speak with, no one, but only to cherish my pain, which was to me a greater bliss than all created things could give me.

St. Terese of Avila, in her autobiography

Turning to Teresa of Avila

Fr. Richard Rohr talks about the impact which St. Teresa of Avila had on him and how her writings are still relevant for us today.

Prayer made St Teresa of Ávila an exceptional woman

Pope Francis explains that her prayer life was essential to her intense relationship with God.